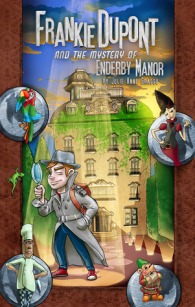 When his cousin Kat disappears from Enderby Manor, Frankie Dupont jumps on the case. Bumbling Inspector Cluesome is convinced that Kat is lost in Myrtle’s Mesmerising Maze, but Frankie isn’t buying it.

He follows the evidence trail to a conniving concierge, a six-fingered chef, a talking parrot, a mad maid and a shifty dwarf, and quickly finds himself in a desperate race to recover Kat before her time runs out…

Recommended for young readers keen to get the inside scoop on how to solve a mystery.

This is a true mystery geared towards younger middle grade readers. Frankie’s dad is a private detective and happens to be away on a case when something very mysterious happens. Cousin Kat goes missing … enter Frankie, keen to put his developing detective skills to the test.

The trail of his missing cousin soon leads him to Enderby Manor, a hotel that has a very mysterious past and is staffed by a cast of oddball characters. The case is assigned to a bumbling Inspector Cluesome, but he soon finds that he has a new pint-sized rival in the investigation stakes. There’s a classic battle of experience (Cluesome) vs young enthusiasm (Freddie) to be the first to get to the bottom of Kat’s disappearance.

Frankie’s investigations soon uncover that the hotel has loads of secrets hidden within its grounds and he collects plenty of clues along the way. Although I must admit there were some clues that I missed, it all climaxes with Frankie finding out that …(?)… did …(?)… and then …(?)…  (No spoilers from me, folks).

Julie Grasso also throws in a bit of  supernatural magic and we soon find that the mystery of Enderby Manor is much bigger than just a disappearing cousin. I expect that young readers will enjoy trying to spot the clues and solve the mystery before the end. This is the first book of a series, so it’s safe to say that there will be plenty more cases in the future for Frankie to solve.

Frankie is the new sleuth on the block who I’m sure will win fans amongst younger readers. He’s accompanied by a cast of quirky characters who add some fun to the mystery. Recommended for young readers keen to get the inside scoop on how to solve a mystery.

If you’re keen to know more, then click below to head on over to Julie Anne Grasso’s website.

While you’re here, please check out my edge-of-your-seat time-travel adventure books by clicking the pic below.

Any advertisments that may occasionally appear below the line are not endorsed by me.