One of the things that we just had to do while in Singapore was to visit the amazing Marina Bay Sands Hotel.   We even went one step further and decided to stay there. This hotel has only opened in the past couple of years and is an amazing building.

It consists of three towers of 55 floors which have the most extraordinary SkyPark across the top of them.  My rough calculations equate the length of this SkyPark to be about the same as the height of the Eiffel Tower – so imagine the Eiffel Tower laying across three buildings. 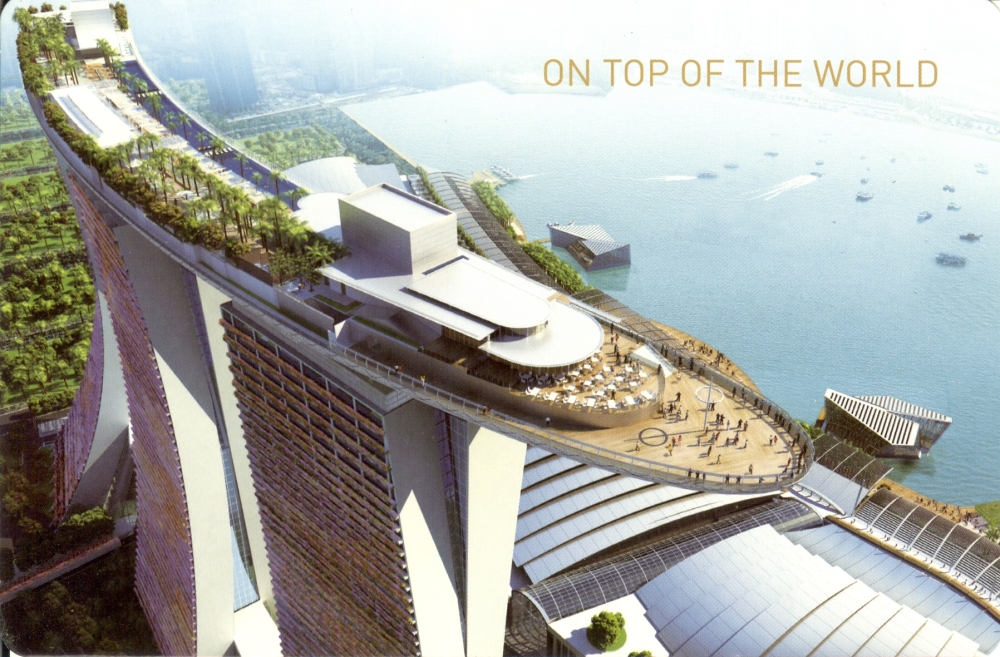 The three towers could best be described as a deck of cards. Imagine two cards leaning against each other and there you have a tower – repeat this three times and you have the Marina Bay Sands Hotel.  The inside of these towers is like an empty void as you look up.  The doors to the rooms line the walkways that look down into the void from above.

For an average family, this is quite a pricey hotel but we found that’s normal in Singapore, so if you want to reduce the cost by booking cheaper rooms you can go for the lower floors (ie. Level 19 or lower).

At night the towers become part of a spectacular show of colored lighting, lasers, music, and movies projected on fountains and fans of water in the bay.  Our room was on the 43rd floor and on the bay side, so we had a great view of the people watching the free light show each night.

Something great to note is that if you are staying there the hotel provides free bus transfers to/from the airport. There is also has easy access to the SMRT underground transport and is linked to a Casino and huge shopping mall that has a wide range of shopping choices. Also, as mentioned in a previous post we also saw a flashmob in the hotel foyer one day which was a fun thing to experience.

The amazing design of this hotel isn’t the only thing that made me want to stay here, one of the most fantabulous reasons to stay here is the SkyPark. The park looks like a huge aircraft wing that sits across the three towers.

Besides the magnificent view, the most breathtaking part of the SkyPark is the pool.  It’s over 100 metres long and has an invisible edge that gives you the feeling of swimming in the sky.  The pool is lined with lounges and waiters and is only available for hotel guests.

We swam in it at night as it was quieter than the day but it also meant that when the nightly laser light show started, we were right in the middle of it.  Swimming up to the pool’s edge we could look down at the flashing cameras around the bay as the lasers were bursting from the palm trees around us up into the sky.  This would have to be the most amazing pool I have ever been in.  It truly was like swimming in the sky.

In addition to the pool, garden areas and a selection of restaurants there is a fantastic observation deck at one end of the SkyPark that offers spectacular views –  This deck costs $$ for visitors but if you are a hotel guest it’s free.

Overall we were pleased with the hotel, we did have a bit of a problem when checking in (they gave us a room with only 2 twin beds – not ideal for a family of 4 that had already pre-booked more suitable bedding) but that was ironed out the following day.  Even if you don’t stay ay Marina Bay Sands it’s worth a visit.