Those of you who have read my books will know that they include time-travel. It’s something that has fascinated me for as long as I can remember. Just imagine being able to travel to different times, to go to whenever you want. To see what it was like in the past and to see what’s in store for the future.

Time is affected by every decision that we make, every person we see or meet, every experience we have. It only takes a split second to change everything. The impact of split seconds on time is never-ending.

My wife was looking though some old photos the other day, and she discovered a very old newspaper clipping that had been collected by her mother. 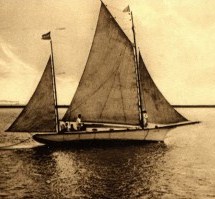 The summer sailing season has commenced tragically at Fremantle. Yesterday was a most inviting day “outside” and a number of yachtsmen eager to take full advantage of the early hot spell set out for a cruise around the adjacent islands. The crew of the 26ft yacht “Alexander” was among them, the names being: – Hector Coates, Alfred Stewart, Leo Reynolds, Charles Green and Joseph Attwood, all belonging to and well known in Fremantle. At the moment it seems beyond all doubt that two of them ­Leo Reynolds and Joseph Attwood have lost their lives, while the remaining three are alive only after winning a terrifying battle with the waves, during which they were a dozen times almost within the jaws of death.

The story is a simple one enough. No foolhardiness or lack of ordinary precautions were manifested. Contrary to early reports, all five were more or less good swimmers, while to a man they were capital sailors and experienced yachtsman. The day was not a stormy one, and the sea was not unusually rough, though a strong wind came up late in the day. The “Alexandra” had cruised around Carnac Island, and the crew had tried the fishing ground, with little success, when it was decided to move further afield, and while crossing “the fathom bank” the boat was suddenly over-whelmed by what yachtsmen who know the locality term a  “dumb breaker” . A treacherously sudden wave of gigantic size which breaks without a roll of any preliminary warning. The “Alexander” was capsized and sunk, and all five of the crew found themselves swept into deep water, with only the top of the mast visible.

It was a time for quick thinking and strong muscles. Attwood and Reynolds chose to swim to the mast and endeavour to hold on in the face of the breaking waves, but Coates, Stewart and Green decided to make for Carnac, notwithstanding the cruel expanse of the sea that lay between – from three to four miles. Crying out “Good-bye” to each other, they began the perilous swim. Green was the first to show exhaustion, and he could not keep pace, so apparently conserved his efforts towards keeping afloat and hoping for rescue. Coates showed wonderful nerve and spirits, and kept urging his companion to put forward their last ounce of energy. At long last they reached the shore, but Stewart was completely exhausted, and unable to join Coates in his effort to secure the rescue of their mates

According to the story current in Fremantle this morning a yachting party, said to be from Perth, was at the Island. To them Coates is said to have hurriedly told his tragic story, and urged them to sail to the spot where he judged his companions to be. To his horror, however, this yacht is said to have sailed a direct course to Fremantle. Staggered at this, but nevertheless determined to do everything in his power, Coates searched further, and found a man whose name is believed to be Chamberlain.

The exhausted Stewart was left on the Island, but together Coates and Chamberlain set out in a 14ft dinghy, which was providently available, and pulled through the choppy sea towards the spot where Green had been floating. By a miraculous coincidence, the little dinghy arrived just at the moment when Green’s strength had actually given out and he actually sank as they came to him. Without hesitation Coates heroically dived into the sea to rescue his companion, but it was only after three such dives that he found Green and brought his apparently lifeless body to the surface. Dragging him into the dinghy, both men commenced efforts towards resuscitation, but it was half an hour before they had the satisfaction of hearing Green again breathe.

One life had been saved, but there were still two and a half miles from where the “Alexander” had capsized, and left but the top of her mast as a haven for the two stricken men to cling to desperately. At last the long row was accomplished, not only could no sign be seen of Attwood and Reynolds, but the yacht had also disappeared. The search was continued, though with little hope, and finally Coates, Green and Stewart were brought on to Fremantle by the yacht “Avena“. Their awful ordeal had lasted from 11 o‘clock in the morning, when struck by the “dumb breaker“, until 4 in the afternoon.

At 5 o’clock this morning the pilot boat “Lady Forrest“, on which incidentally both Coates and Stewart are employed set out for the scene of the disaster with Coates as guide, and made an exhaustive search of the locality. She returned early this afternoon, however, without having found any trace of the missing men or yacht and it must be assumed that they are drowned. The weather thickened considerably towards evening, and a rather rough night prevailed at Fremantle.

Sharks were seen by Coates and Stewart during their memorable struggle towards the shore, and it was considered miraculous that Green had not been attacked by them during the long period in which he floated a mile or so from the island. This morning Coates, Stewart and Green were naturally somewhat exhausted, but otherwise none the worse for their trying experience.

The pluck and resourcefulness shown by Coates was universally commented upon in the Port today, and the feeling is current that his brave action should not pass unrecognised. The missing men were unmarried. Attwood was employed by the Vacuum Oil Co., and resided at the Rose Hotel, North Fremantle, whilst Reynolds was in the employ of D. & J. Fowler Ltd., his home being in Cantonment St, Fremantle.

As I mentioned before, time is impacted by every decision and every event. That was quite an amazing news story from a very long time ago, and I can categorically say, that random event has had a huge impact on me, personally.

Did I mention that time is impacted by every decision and every event?

I cannot imagine what my life would be like if Charles Green hadn’t been rescued from the ocean all those years ago.

9 responses to “Ripples of Time”