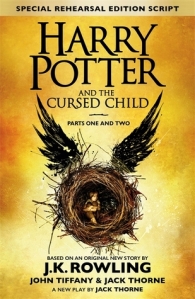 Based on an original new story by J.K. Rowling, Jack Thorne and John Tiffany, a new play by Jack Thorne, Harry Potter and the Cursed Child is the eighth story in the Harry Potter series and the first official Harry Potter story to be presented on stage. The play will receive its world premiere in London’s West End on 30th July 2016.

It was always difficult being Harry Potter and it isn’t much easier now that he is an overworked employee of the Ministry of Magic, a husband and father of three school-age children.

While Harry grapples with a past that refuses to stay where it belongs, his youngest son Albus must struggle with the weight of a family legacy he never wanted. As past and present fuse ominously, both father and son learn the uncomfortable truth: sometimes, darkness comes from unexpected places. – GOODREADS

Wow. How great was it to return to Hogwarts with another new adventure? My overall thoughts on The Cursed Child – great – and would absolutely love to see it on stage if I ever get to London again. My aim is not to include any spoilers in this review, so here goes.

It’s widely known that The Cursed Child is the product of J.K.’s world and that it isn’t a book completely penned by her as such, but a script for the London play. So, the first thing you need to do is keep that mindset … it’s full of dialogue that reads differently from a book but draws on the reader’s own knowledge of the HP world for atmosphere and detail.

The focus of the story is on Harry’s son, Albus, and Malfoy’s son, Scorpius. Who would have thought I would find any son of Draco Malfoy likable? But they’re not the total focus … fans are rewarded with the return of all of their favourites, in one way or another.

We’ve all wondered what happened to Harry and Co after that last scene at Kings Cross in Deathly Halllows. Well this amazing story shows us what was, and what may have been. It’s a great way of exploring how things in the past can impact the future, and of all the different possibilities, which I know have been thrown around by fans since HP7.

IMO I think that this one sits with true fans, in that the storyline pays tribute to many of the great things that we’ve read in the other books over the years. It’s like we are returning to events and scenes, but with a slightly different perspective. We all have our own imagined visions of what happened in books 1-7, and of course, we’ve seen the movies that give us a great visual reference to look back on. I’m not sure that readers who haven’t read HP or at least seen the movies (Are there any muggles like that?) would be able to translate the script into their imagination without prior knowledge of the settings and events it refers to.

Other reviews that I have read for HP8 have been mixed, but that’s natural given that this series means so much to so many people. I had been looking forward to this book since I first heard it was coming, and now that I’ve read it, I have a tinge of sadness that it really is the last of the HP tales. They say …. all good things must come to an end … but … at least we have Fantastic Beasts and Where to Find Them on the horizon to look forward to.

Checkout my other Harry Potter reviews:

Harry Potter and the Chamber of Secrets

Harry Potter and the Prisoner of Azkaban

SUBWAY | PALLIATOPIA
Everything has a price.

If you would like to put your name forward as a Beta reader or an ARC Reviewer for Subway | Palliatopia please mention it in a comment below or get in touch via the Contact Me page.