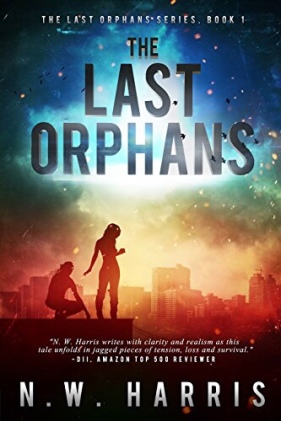 One horrifying day will change the life of sixteen-year-old Shane Tucker and every other kid in the world.

In a span of mere hours, the entire adult population is decimated, leaving their children behind to fend for themselves and deal with the horrific aftermath of the freak occurrence.

As one of the newly made elders in his small town, Shane finds himself taking on the role of caretaker for a large group of juvenile survivors. One who just happens to be Kelly Douglas–an out-of-his-league classmate–who, on any other day, would have never given Shane a second glance.

Together, they begin their quest to find out why all of the adults were slaughtered. What they find is even more horrifying than anything they could have expected–the annihilation of the adults was only the beginning.

Shane and his friends are not the unlucky survivors left to inherit this new, messed-up planet. No, they are its next victims. There is an unknown power out there, and it won’t stop until every person in the world is dead. – AMAZON

The Last Orphans is one of those surprises that we come across every so often. It’s a dystopian thriller about a world where adults are wiped out and only the young are left. Yes, it sounds familiar but this book somehow grabbed me from the get go.

The drama started from page one, where we were introduced to the protagonist, Shane Tucker. A bond was quickly established as we saw first-hand the struggles he faces in his normal everyday life. From there, things move along at a fast pace and the plot had me intrigued to a point where I read the whole book within days (which is unusual for time-poor me). I found that each page was bait to the next, I needed to find out how things would pan out.

Shane finds himself in the position of leader for a motley crew of other teens and younger kids who have all become orphans due to the catastrophic event we encounter in the early pages. As you would expect in a book about a huge tragic event, there is a lot of death, a lot of violence, and a lot of grisly detail, which the characters need to deal with in their own ways.

If there was anything I wished was done better, it would be for a better explanation of how the event did what it did. Although I accepted that it had happened, I wasn’t convinced that what happened was feasible, or logical, or backed up with enough believable theory (I know I sound vague, but I’m trying not to give too much detail away).

Another part that I struggled with was when Shane and his crew entered the city and encountered the gangs. I felt that the gangs seemed too well-formed and embedded, given that they would have only been formed within the preceding couple of days.

But these details didn’t stop me from being engrossed in the underlying story, even with all of the graphic violence and vividly described horrors that cropped up along the way. If you’re looking for a YA book that’s a fast-paced trip and you aren’t the squeamish type, then this one’s for you. Not recommended for the lower age range of YA readers.

This is a good start to a series that’s full of action and drama. I do intend to read the other books – the only obstacles to this are time and my already large TBR pile.

The books in this series are: