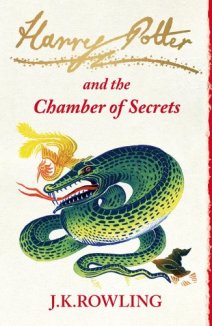 The Dursleys were so mean and hideous that summer that all Harry Potter wanted was to get back to the Hogwarts School for Witchcraft and Wizardry. But just as he’s packing his bags, Harry receives a warning from a strange, impish creature named Dobby who says that if Harry Potter returns to Hogwarts, disaster will strike.And strike it does.

For in Harry’s second year at Hogwarts, fresh torments and horrors arise, including an outrageously stuck-up new professor, Gilderoy Lockheart, a spirit named Moaning Myrtle who haunts the girl’s bathroom, and the unwanted attentions of Ron Weasley’s younger sister, Ginny.
But each of these seem minor annoyances when the real trouble beings, and someone–or something–starts turning Hogwarts students to stone. Could it be Draco Malfoy, a more poisonous rival than ever? Could it possibly be Hagrid, whose mysterious past is finally told? Or could it be the one everyone at Hogwarts most suspects…Harry Potter himself. [Goodreads]

The HP series is crammed full of magic and lessons. Each book casts an enduring spell over me every time I read it.

I think this is the fourth time I’ve read this book and I still make little discoveries along the way. Small things that I’ve missed (or forgotten) that trigger memories of characters or plots that will happen in later books.

Over the years I’ve seen that some readers have said that this book was their least favorite in the series. I for one loved it, just like I love all of the others. To me, all of the books make one big story, and they all provide unique elements that have created the Harry Potter phenomenon. So, I honestly can’t separate any of the books from the others and play favorites … they’re all my favorite.

In this book, we get to spend more time with our awesome [friends] characters Harry, Ron, and Hermione as they grow and tackle another year of challenges. Hogwarts is their safe haven, but in the blink of an eye, that safety is shattered. The famous school suddenly has an unknown evil within its walls, and the students are its target.

We learn more about Hagrid’s troubled school days at Hogwarts and see Ginny become a more important character as she starts her first year at the famous school of wizardry. There’s the ego-rich Gilderoy Lockhart that adds an annoying but humorous element to the story (I bet we all know a Gilderoy or two or three). The marvelous Dobby makes an entrance and dives into our hearts as he tries to warn and save Harry from looming danger. His humble nature is continually challenged by his sad life of subservience and disrespect from his horrible master, Lucius Malfoy. His grace and goodness shine through as a lesson to us all, and he is deservingly rewarded by Harry in the end.

This book culminates in another battle against the dark force of Harry’s arch-enemy – Voldemort (aka Tom Riddle). It was great to be back in Hogwarts once again, I can’t wait to move onto book 3.

Check out my other Harry Potter reviews:

16 thoughts on “Harry Potter and the Chamber of Secrets | J.K. Rowling”