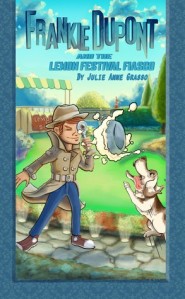 Hot off cracking his first official case, Frankie Dupont is on the scene when his new teacher takes ill. The pint-sized detective suspects a classic case of sour grapes, but the evidence leads him to the one place he wouldn’t mind avoiding for the rest of his natural life.

Enderby Manor has a few more secrets up her sleeve, and as Frankie begins to unravel them, he uncovers a plot stinkier than a sardine sandwich.

In Book 2 of the Frankie Dupont Mysteries, Frankie will make some new friends, upset some old ones, and of course, there will be lemon meringue pie.

Frankie DuPonte returns to our shelves and ereaders in his second juicy case. This trainee private investigator is keen as mustard to earn his stripes and, as with his previous case, some sweet treats have a starring role. In this new story, a simple Lemon Pie is the starting point of a mystery that just keeps growing and growing and growing.

Every clue solved by Frankie creates even more questions, and there’s no beating around the bush with his feisty questioning technique. When Frankie is on the case, there’s only way to get to the bottom of things … accuse first, then backtrack if he’s wrong. Perhaps his biggest flaw, as with any rookie, is his tendency to jump to conclusions, and mistakenly think he has solved the case in a flash.

Even being wrong at times is something that doesn’t seem to faze him in his search for the truth. I’m sure that as he further learns his craft he will find that tact and trickery can also be a good approach, but until then, I can see his methods getting him in trouble. Even so, he always seems to walk away with some useful information.

This is a great book for would be sleuths. I can imagine young readers keenly looking for, and picking up the evidence along the way. It has a good pace for the target audience and there are plenty of good clues ready to discover. I thought that the logic behind them, and the paths on which they sent Frankie, were believable and well thought out. The plot also teaches that you shouldn’t jump to conclusions too early and highlights the importance of strong evidence.

I also liked Frankie’s recollections of his father’s advice, even if they weren’t entirely accurate most of the time. As a parent, it was nice to see that he had such belief and admiration in his father.

In the end, all of the clues and trails lead to the Lemon Festival in the grounds of Enderby Manor, which is a fitting location for the story’s climax. Then, just like the mysteries of that other (much older) super sleuth (Agatha Christie), once all the suspects are present and all the clues click into place, Frankie shines in the big reveal. It’s another case solved, and I’m sure there are many more to come. 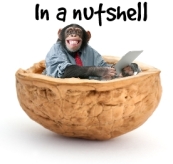 This is another fun filled Frankie mystery that will definitely interest young budding detectives.

It’s a great mystery that starts with a humble pie and ends in … I’m not telling.