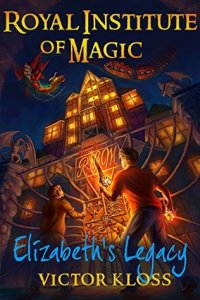 Two years ago, Ben Greenwood’s parents walked out the door and never returned. The police have all but given up finding them when Ben stumbles upon a peculiar letter addressed to his dad. “You are the most wanted man in the Unseen Kingdoms. Unless you come to us, we cannot help. For your child’s sake, tell us what you know.”

Armed with nothing but his wits and the help of his good friend Charlie, Ben sets out to find the Institute and, through them, his parents. To succeed, he will have to navigate a land filled with fantastic creatures and Spellshooters, where magic can be bought and sold, to unravel an ancient family secret that could hold the key to defeating an evil the Institute has been fighting for the last five hundred years. – GOODREADS

This first book in The Royal Institute of Magic series is a great tale of discovery. It’s an engaging read that follows the trials of a young boy as he learns of his parent’s past while trying to find out what happened to them.

This is a book of family secrets that cast two friends on an adventure they could never have imagined. Ben and Charlie are two friends that are like two peas in a pod. Kudos to the author for these two. He nailed their relationship so well, and the dialogue between them is spot on. They are totally believable and endearing characters.

Dragons, goblins, elves and magic. This book is crammed with plenty of things to attract readers. There’s something for everyone.  From their journey to find the highly secret Royal Institute of Magic, to the dragon train that takes them to Taecia (which sounds amazing), Kloss has created a whole new world that exists beyond what we see every day. It’s a hidden treasure that is vividly described, inspiring amazing visions as I read.

In addition to Ben and Charlie, there is a cast of other great characters. There’s Aryan, the dark elf, who reminded me very much of Draco Malfoy. And there’s Natalie whose intellect is a cut above the rest. She doesn’t miss a beat, and knows Ben’s plans before he even makes the decision to share them with her.   The underlying story here is one of great friendship and a search for answers. Ben is learning of his parent’s past, and it’s not always what he wants to hear. But throughout the book, he remains loyal to them and longs to clear their names.

There’s also lessons about learning to know who to trust, which is something that takes plenty of practice for everyone. I hope to read many more adventures of Ben and Charlie.

Elizabeth’s Legacy is a good start to a series, and the search for Ben’s parents is set to continue into next books. Given the subject matter, it’s natural for other wizarding books to come to mind, but I think the author has succeeded in building a world sufficiently different to those that we already know.

Buy from Amazon | Add to Goodreads