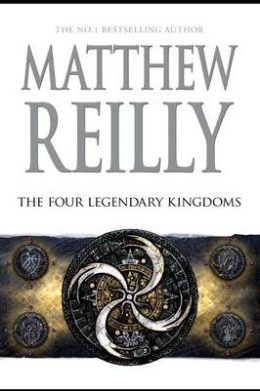 A RUTHLESS KIDNAPPING
Jack West Jr and his family are living happily on their remote farm… when Jack is brutally kidnapped and he awakes in an underground cell to find a masked attacker with a knife charging at him.

THE GREAT GAMES
Jack, it seems, has been chosen – along with a dozen other elite soldiers – to compete in a series of deadly challenges designed to fulfill an ancient ritual.

With the fate of the Earth at stake, he will have to traverse diabolical mazes, fight cruel assassins and face unimaginable horrors that will test him like he has never been tested before.

TO HELL AND BACK
In the process, he will discover the mysterious and powerful group of individuals behind it all: The Four Legendary Kingdoms.

I’ve been a Matthew Reilly fan for years. Over that time I have enjoyed the over-the-top settings and plots, and incredible ingenuity of his characters. Some books I have liked more than others. So, when MR brings out a new book, I’m one to grab a copy as soon as possible.

Four Legendary Kingdoms is part of an ongoing series that follows the exploits of Jack West Jr. The book is an adrenaline filled adventure. In the early part of this one, I was initially confused. The setting and storyline seemed too mythical, so I was convinced the book must be in a dream sequence. It wasn’t.

So, as the plot unfolds, we learn how Jack ended up fighting minotaurs etc. I know MR books need you to suspend belief, but I was beginning to think that this one may have jumped the shark. As the plot was revealed we were reminded of past battles, which helped to make me realize (and remember) that anything is possible in Jack’s world. I accepted the storyline and just went with the flow and enjoyed the ride.

Then, when Scarecrow arrived on the scene, my concern returned. I had never seen this type of crossover being done before by MR. For those of you who don’t know, Scarecrow is the main character in another great MR series. I had never imagined the two would meet. At 45%, I had to remind myself to cast my concerns aside and to once again just be taken on the ride. With that mindset in place, I found that I enjoyed the book, although not as much as previous ones.

Another good off-the-scale adventure from MR. Maybe not as gripping as previous books in the series, but still a good way to escape reality.

Click the book cover to LOOK INSIDE for a sneak peek.